It was an artistic and clean last jump.

August 20-26 (Berlin, Germany) World Para Athletics European Championships –  On 8/21 (second day of competition), Heinrich Popow (Germany) participated in the Men’s long jump (T63/Use of leg prosthesis etc).  Although he fell just behind his rival Daniel Wagner Jorgensen to second place, he had a fine last performance in his home country of Germany. The Three Athletes at the Final Competition

July 8 (Japan Para Championship at Shoda Shoyu Stadium Gunma), Popow competed in his second to last competition against his rivals from the 2016 Rio Paralympics: Atsushi Yamamoto (Shin Nihon Jyusetsu/Rio Silver medal) and Daniel Wagner Jorgensen (Rio Bronze medal).  Since Yamamoto would not be at the European Championships, this was the last time these three would meet. Friedrich-Ludwig-Jahn-Sportpark – 8/21: Fans in the stands waved a large sheet with a portrait of Popow printed, and the German team showed support with a banner with the phrase:  “Jump, Heinrich, Jump!”.   The announcer led the crowd as the fans clapped and cheered on the athletes.

The competition proceeded as each athlete on the field strived to become the next European champion. Popow missed the first 2 jumps.  Jorgensen, on the other hand, had a large jump of 6m 49 from his first try.  On his third jump, he marked 6m 72. スタンドからも暖かい声援が投げかけられた Cheering fans in the stands During this competition, fellow competitor Luke Sinnot (GBR) was faced with a misfortune where his prosthesis malfunctioned.  However, the staff of Ottobock, a medical technology company based in Germany, was able to help repair it immediately.  Jorgensen who uses a prosthesis manufactured by the same company Ossur brought his spare, and Popow who is a licenced prosthesis orthologist came to see if he could help as well. Sinnot was able to return to the competition and marked his best 5m 54 on his 5th trial. ルークの義足が跳躍時に破損。修繕し競技に復帰した Luke’s prosthesis malfunctioned during competition. He returned after repairs

For Popow, his best jump of the day was his third jump, 6m24.  Although he marked his season best by surpassing his record of 6m21 at the Japan Para Championship, he shouted with angst after his later jumps.  However, after his last jump, he smiled back at the crowd which cheered him on. Yamamoto was in the stands to see his rival’s last jump.  He had experienced an operation in July after dislocating his left shoulder at the end of June and was in a sling, but brought flowers to celebrate Popow’s accomplishments.  When the competition ended, Popow invited Yamamoto to the field.

”I said to him: “Atsushi, you are crazy to come from Japan to see my last jump! Thank you for coming.  If you are not in pain, can you put your arm around my shoulder so we can take a picture together?”
Daniel (Jorgensen) really jumped well today.  I think Atsushi and Daniel will continue to compete against each other.  Atsushi will probably train hard, so it will not be an easy feat for Daniel to win the next one”. (Popow)

While the last competition was in Japan, this scene in Berlin was the last time these three would be together on the field.

”So many people came to support me today.  I feel a bit sad that this will be my last competition.  I became a bit emotional so it was hard to focus on the competition”.

――It seems that everyone loves you.

Popow answered with a shy smile,

“Those who support me are working hard to support parasports.  This is why we are able to understand each other and be passionate. My parents always said to do good for others. I think I’ve tried to do this and so I’ve been able to get support from others as well”. Parasports are powered by the enthusiasm of the people

Born in Kazakhstan in 1983, Popow moved to Germany with his family when he was 7 years old.  When he was 9, his left leg was amputated due to Ewing’s sarcoma in the left fibula. In 2001, he started working for the sports club “TSV Bayer 04 Leverkusen” which manages the German Football club Bayer 04 Leverkusen.  Here, he started his career as a para-athlete.

As he started to show potential, he grew to be successful at the Paralympic level.  He competed in 4 Paralympics in a row starting with Athens 2004 and achieved 6 medals in total, including 2 Gold medals.

As one of the most famous athletes in Germany, Popow has had several opportunities to be featured in the media.  His thoughts are that the Paralympics and Olympics should be thought of separately.

“The Olympic games are a business.  People also tend to focus constantly on the competition.  Not much seems to be said about the human relationships involved.  For example, some athletes do not stay at the Athlete village in a shared space, and prefer to stay at a 5 star hotel.  In contrast, Parasports is based more on the passion of the people involved”.

These are the words Popow spoke in the mix zone after the European Championships.  He also has shared these feelings with Japanese media in the past.  It seems that he is not denying the Olympics but is suggesting that perhaps the Olympic participants could benefit from revisiting what a true celebration of sports should be.  These words give us a hint into what Popow’s thoughts are based on. Popow’s true passion is seen also outside of the competition field.

Popow has conducted running clinics for people using prostheses around the world in collaboration with “Ottobock”.  The clinic has started in Japan also in 2015 and there are plans for one to be held later this year.  He coaches with originality and humor all level athletes from those who just started to the seasoned Para athlete.  Yamamoto also helps as a coach at the clinics.

A running clinic was held in Berlin on August 23, 2 days after Popow’s last jump.  12 participants came from 10 countries around Europe (Italy, Switzerland, Germany, Poland, Turkey, Netherlands, Czech Republic, France, Romania, Hungary).  One young man who participated from the Netherlands (both legs, lower leg amputee) was seen in a big smile trying to run across the grass field. “Don’t try to run fast.  Imagine catch a coin between your buttocks and try not to drop it, Pull your legs forward, try to keep the weight on both sides the same and keep your center of gravity straight as possible”.

Popow’s voice echoes throughout the soccer field next to the main stadium.  On the next day, a session was held on the all weather track. After Japan Paralympic Athletics competition, Popow was joking :” I’m going to eat junk food and drink beer, and sit back to watch others compete” However, it is clear what he will continue to do.

His mission is to spread Parasports around the world.

“I want to continue fighting negative feelings like, “ I can’t do it! It’s impossible” for the sake of improvement in the QOL (Quality of Life) of people with disabilities and challenges.  I hope to help make sports a more closer part of people’s lives. I understand Japan is now preparing for the 2020 games.  If I can be of any help, I am happy to contribute.  I love Japan”.

Popow commented as follows when asked:

――What is so good about sports?

“The best part of sports is that it motivates people and it brings people together.  It is always open to everyone.  It is the best medicine and can help people to move forward in a positive way.  It creates dreams and goals, and can motivate people to realize them.  We never say it’s impossible.  Yes, I can.  Yes we can.  This feeling opens people’s hearts and helps strengthen respect towards each other”. 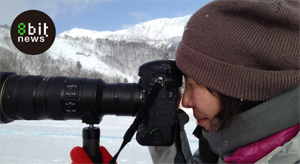